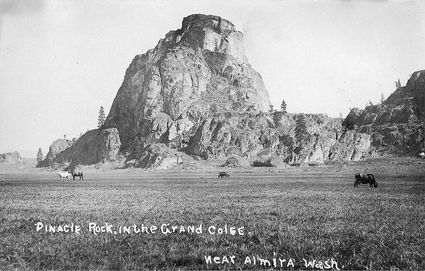 The area around where Grand Coulee sits today was sparsely populated around the turn of the 20th Century, and the few settlers and ranchers all knew each other. They also knew Texas Jack, a loner who lived down in the bottom of Rattlesnake Canyon, in a cave.

One day, Texas Jack returned home with a young mixed-race woman. He never called her by name in public and referred to her as 'Woman" as if that was her name. She dressed rugged and in men's clothes. Some people in the community took pity on them as they seemed uneducated and unwashed. However, whenever something went missing from a shed or barn, fingers would point at Texas Jack. "One day we'll catch him red handed and he'll hang from a tree," all the men exclaimed when a cow or some other livestock went missing.

Texas Jack and Woman were allowed to roam freely in the lawless Grand Coulee and were seen more as a nuisance than a real threat - until the day Oscar Osborne's prize and pet work horse, Tommy, went missing. To be concluded...