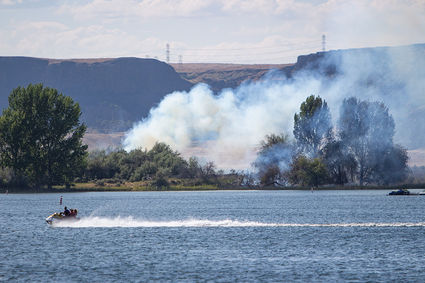 Smoke rises from a wildfire near the mouth of Osborn Bay Monday afternoon as people on a personal watercraft recreate near Sunbanks Resort. - Scott Hunter photo

Fireworks caused one fire on Independence Day and another Monday afternoon.

On the Fourth of July, a fire across from the Northrup Point boat launch burned about a tenth of an acre, Grand Coulee Volunteer Fire Department Chief Ryan Fish told The Star in an email.

That fire was put out by the Bureau of Land Management, which had had about 20 firefighters stationed near North Dam and ready to answer regional fire calls.

The Bureau of Reclamation contracted with BLM last year to handle wildfires on lands it manages in the region, stopping the previous local practice of allowing fireworks to be set off on top of North Dam to avoid fire problems elsewhere.

Favorable winds pushed the fire toward the water, aiding in the suppression.

Both fires were started by fireworks, Fish said.