Boating collision on Banks Lake leaves one boat atop another 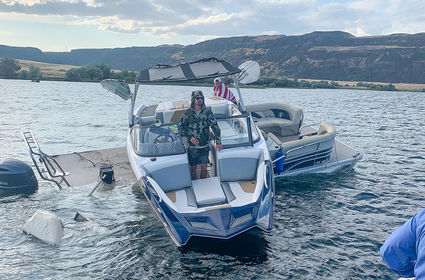 Two people involved in a boat collision on Banks Lake that left one boat atop another stand in the boats waiting for marine deputies from the Grant County Sheriff's Office Thursday night. - submitted photo

When Mark Head noticed the other boat headed straight for him in the middle of Banks Lake, it was too late.

Head, 51, from Cashmere, and the four others aboard his pontoon boat, including small children, had been just floating, doing some cleaning up without the engine running about 5:25 p.m. Thursday when he saw the wake boat coming.

Head hurried to try to start the engine and move, but couldn't before the other boat hit, stopping instantly on top of the middle section of the pontoon boat, right behind the steering wheel.

The driver of the other boat, Alexander Bozko, 33, was thrown into the water. So was a 2-year-old child passenger of the pontoon boat who had reportedly been asleep on the rear bench. The child, wearing a life jacket, was pulled from the water by a bystander.

"They were both rescued by other boaters and suffered minor injuries," a press release from the Grant County Sheriff's Office states. "Four other passengers from both vessels sustained minor injuries. The 2-year-old was wearing a life jacket, which without a doubt helped save their life."

"Sheriff's Marine Deputies attribute inattention by Bozko as the cause of this collision," the release said.

Bozko told them he'd been traveling north at about 20 mph, talking with his passenger and not paying attention, the sheriff's office said.

The others in the pontoon boat included a woman holding an infant. The 2-year-old and the infant were each wearing personal flotation devices, the sheriff's office noted. All victims suffered minor injuries.

Mark Payne, chief of Electric City's fire department, who had been at the scene, said the collision occurred in the middle of the lake near the Grand Coulee Dam Airport.

But they weren't easy to find. Confusion as to the location of the boats led to a delay of 30-40 minutes in finding them. Those on the pontoon boat were camped at Jones Bay, where rescuers initially looked, but the boat had actually launched from Northrup Point.

Payne used his own boat to take firefighters and emergency medical technicians to the scene and took the driver back to shore. Brian Walters of Grand Coulee's fire department used his boat to take back the women and children.

Looking at the damage from the accident, Payne said he was amazed no one had been more seriously hurt.

The damaged boats, a 2015 Sunchaser pontoon and a 2017 Tige wake boat, were towed into Coulee Playland around 9 p.m.