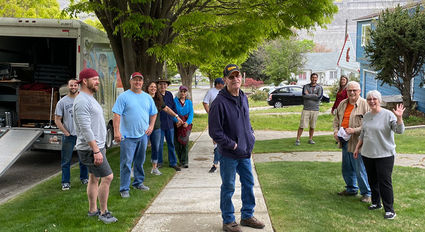 After helping build a community of faith for decades, a longtime local couple recently made the "heart-wrenching" decision to move away to start their retirement.

Steve and Janice Archer directed the final effort to load a 24-foot moving van in front of their Coulee Dam home Saturday, as friends, neighbors and Faith Community Church members packed more into the truck than they'd thought could fit.

Pastor Steve Archer delivered his first sermon to the young church that recruited him in 1984, on Palm Sunday. He'd hoped to finish on that same sacred day this year, but the statewide COVID-19 emergency made that impossible.

When the couple came here from Bothell, Washington, they were struck by the relative lack of trees. Janice had grown up in Portland, Oregon, and Steve in Shelton, near Washington's coast.

"It wasn't long before we fell in love with the place and the beauty," Steve said. "The main beauty was the people."

The church had 40 to 50 attending back then, and it's gone up and down over the years, Steve said. The congregation, which now averages around 100 and up to 150 attendees, refurbished and expanded its facility a few years ago.

The couple were heavily involved in the local school, too, with Steve coaching high school tennis for 10 years and Janice working at the school for 24 years, and coaching middle school volleyball for 11, both of them also refereeing. Four three or four years after she retired, Janice and others volunteered to put on morale-boosting meals for the staff at the high school. It was dubbed Operation Red Apple, for which Janice received an award from the Educational Service District.

And all that is not to mention their four children, all graduating from Lake Roosevelt High School.

Those now-adult kids and the Archers' 14 grandchildren weighed in their decision to leave, which didn't come easy, they said. "Horrible, heart-wrenching, bittersweet," Steve called it.

Their new home in Post Falls will be near eight of the grandchildren, with one daughter a 10-minute walk away from the new single-floor home they had built in a move that should make it easier on Janice, who had hip surgery a year ago.

Now, a new pastor and his wife are leading the church, currently in Zoom-enabled worship services.

Believing the new couple and the congregation would be helped along by their departure, the couple decided, "Yeah, we're supposed to move," Janice said.

"It's been a rich, rewarding time for us," Steve said, "but we've come to the end of this chapter."