Governor: no in-person teaching rest of school year, at least 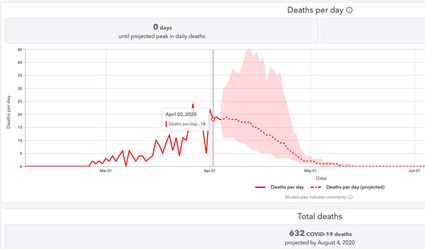 A University of Washington estimate on the number of deaths per day peaked on April 2, said The Institute for Health Metrics and Evaluation on Monday, but would still lead to 632 dead by August.

Most kids won't enter their classrooms again this school year, following Gov. Jay Inslee's announcement Monday afternoon that in-person teaching would not be allowed in any schools in Washington at least for the remainder of the school year.

The decision was based on the latest data available on the trend curve of COVID-19, the illness caused by the novel coronavirus that had sickened nearly 8,000 in the state and killed 338 as of Sunday night, Inslee said, even as some noted what might be an earlier peak in the number of infections than had been projected.

"We cannot risk losing the gains we have made after the peak of this pandemic presumably will have passed," Inslee said. "This closure order will also allow educators to fully focus their energies and their amazing creative talents on the best way to provide education to their students in this challenging circumstance."

Inslee made the announcement with Superintendant of Public Instruction Chris Reykdal, who said schools need to become "significantly better at this distance model in case we find ourselves in that reality" of a pandemic extended into the fall.

"We've got kids everywhere," said Superintendent Paul Turner, including some who "don't even have cell service, let alone internet."

He said the district is trying to contact every student to find out who can be connected and who will need help.

How does it work when a family has no internet service and the only cell phone goes with mom to work?

The district had been able to contact about 400 of its more than 700 students as of Monday night.

Even so, Lake Roosevelt Elementary teachers will be arranging for virtual conferences with parents next week.

The district will have to decide how to handle senior grades, which have been recorded throught the third quarter. Some districts are considering a pass/fail distance learning fourth quarter, which would essentially freeze a students grade point average at its third quarter end.

"The bigger question is what will that look like to colleges," Turner noted. "We're looking at each senior individually and identifying their need."

And the district might have to "get creative" to provide a graduation ceremony this year. "We've just got to come together and see what we're going to do," he said.

Reykdal said his office is "researching some legal tools we have to ensure that their grades are intact that their (grade-point averages)are not impacted, and they have a lot of success transitioning to higher ed."

The Institute for Health Metrics and Evaluation at the University of Washington lowered its estimates of projected deaths in the state and on a shortened timeline, given continued social-distancing measures, prompting Inslee to release some 400 ventilators back to the federal stockpile for other state's to use.

Even so, "we do not want that curve to suddenly spike up because we acted too quickly to come back" to school Reykdal said.