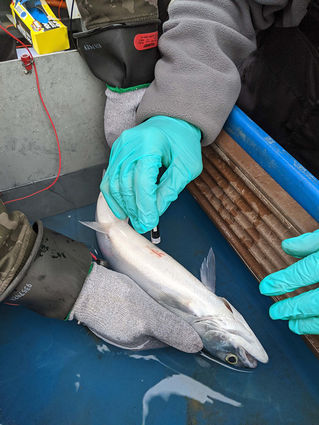 Wild kokanee in Lake Roosevelt, showing low numbers, are a subject of study for the Colville Tribes' biologists.

For the next two years, groups of kokanee will be caught and tagged in order to study their movement patterns, a press release from Colville Tribes Fish & Wildlife says.

The goal of the project is to protect and enhance the wild kokanee salmon populations above Grand Coulee and Chief Joseph dams in an effort to support tribal subsistence and recreational sport fisheries.

"The wild kokanee population that returns to the Sanpoil River to spawn has been on a steady decline since the early 2000s," said Holly McLellan, fisheries biologist for the Colville Tribes.

The fish are choosing other spawning areas in Lake Roosevelt and its tributaries, the release said, and the fishing of the species has "exhibited a boom and bust cycle over the past 10 years.

"We hope our work will help biologists and managers understand what factors create this cycle so that we can make adjustments to help stabilize the population," McLellan said.

Tribal biologists will work with the Washington Department of Fish and Wildlife and the Spokane Tribe to develop strategies to enhance the wild kokanee population in Lake Roosevelt.

Recently, 15 wild kokanee were implanted with acoustic transmitters that will allow biologists to track their seasonal movements. Colville fisheries staff will be able to track kokanee from Grand Coulee Dam upstream to Keenleyside Dam in Canada.

"The tags we implanted allow us to track where in the lake they travel by sending a signal to one of 100-plus receivers that are out in Lake Roosevelt and Rufus Woods so we can tell if they are in Lake Roosevelt or entrained at Grand Coulee Dam," said Charles Joseph, fisheries biologist for the Colville Tribes. "The tags also have temperature and depth sensors, so we know where in the water column they are during each season, deep in summer versus shallow in winter; it could be helpful with locating their spawning grounds."

A guide service was hired to assist with capturing efforts while staff took samples and weighed and measured each fish.

Fisheries staff would like the public to know that they used small acoustic tags that are black, cylindrical in shape, and are about one inch in length. If anglers capture a kokanee with this tag, they are asked to call Charles Joseph at 509-634-2103.