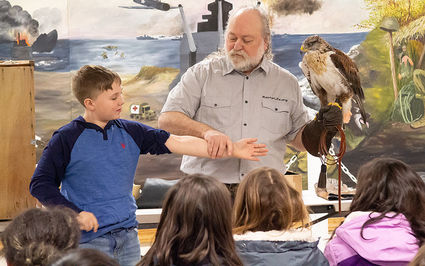 Craig Moran, holding August the ferruginous hawk, shows LR student Reece Johnson, on his arm, where August had gripped Moran with her talons the day before. Moran said she'd shifted her talons off his protective glove and that the talons felt like needles piercing him. - Jacob Wagner photo

Craig Moran held up a 30-year-old hawk to a room full of young students at the Vets Hall in Electric City during a two-day event to educate them about birds of prey.

Moran, of RaptorLife, a company that teaches people about the raptor category of birds, was showing them August, a 30-year-old ferruginous hawk, that was taken from a nest in Wyoming in 1990.

Moran spoke to a mixture of fourth- through eighth-grade students from Lake Roosevelt Schools, and from schools in Wilbur, Creston, Davenport, and Bridgeport during Bird Fest Feb. 19-20 and educational event organized by National Park Service Education Specialist Janice Elvidge.

At the American Legion building, Moran passed feathers around the room full of students and explained numerous facts about raptors.

"Those feathers make them look a lot bigger than they really are," he said, explaining that their skeletons are quite a bit smaller.

Moran, a licensed falconer since 1988, passed around a falconry hood.

He explained that a part of training hawks is to use a "rabbit lure," a sort of stuffed animal on a rope with some meat attached to it, dragging it along the ground to get a hawk to come to the trainer.

Falcons, on the other hand, like to eat other birds, and so a feathery thing attached to a rope is swung around to get a falcon to come to a trainer.

Moran emphasized to the students that August is not a pet, that raptors are killing machines, and that she won't come if he calls her name, only when he has a piece of meat ready for her.

"The experience for the students of seeing live birds was "way better than reading about it in a book," LR teacher Nicole Rasmussen told the Grand Coulee Dam School District board Monday.