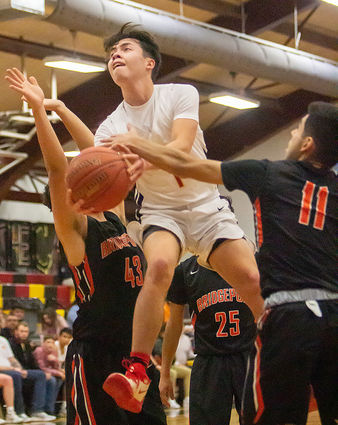 Soarin' Marchand is bound and determined to get a shot off against Bridgeport on Monday, weaving in and out, up, down and around defenders' limbs to do so. - Jacob Wagner photos

The Raiders defeated the Oroville Hornets 64-40 Jan. 24, then soundly put down the Bridgeport Mustangs Monday night, both in Coulee Dam.

The Raiders are sitting pretty on top of the Central Washington 2B league with an 11-0 win-loss record, 13-2 overall.