Supporters say fewer bullets would increase safety. Opponents say it would infringe on their gun rights. 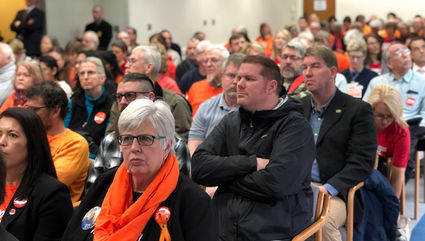 Washington residents at a Senate Law and Justice Committee hearing on a proposed ban on high capacity gun magazines this week. Many wore orange in support of gun safety. -- Photo by Leona Vaughn, WNPA News Service

Gun magazines that hold more than 10 rounds of ammunition would be outlawed under a proposed law moving through the state Senate.

Supporters cite safety concerns, while opponents argue the measure, which cleared the Senate Committee on Law and Justice Jan. 23, would place new restrictions on Washington residents' right to bear arms.