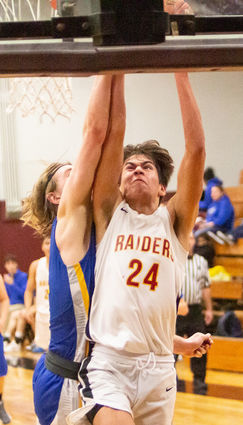 Right - Sam Wapato draws a foul near from the Tigers' Tiler Morris near the end of the 30-point blowout Friday night. - Scott Hunter photos

Lake Roosevelt's Raiders left no doubt about their dominance over two league teams last week, besting Oroville on the road and Tonasket at home, both with double-digit leads.

The Raiders defeated the Oroville Hornets 75-46 Dec. 17 in Oroville.

In the Central Washington 2B League, LR and Brewster both have win-loss records of 4-0 and are followed by Manson (3-1). 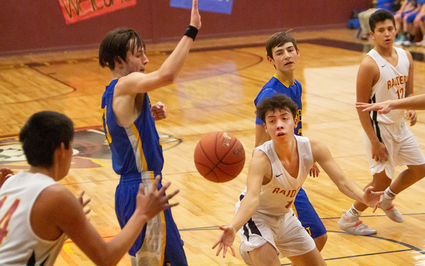 Below - Soarin' Marchand abandons a layup in favor of a pass to CJ Saxon, who made the basket.