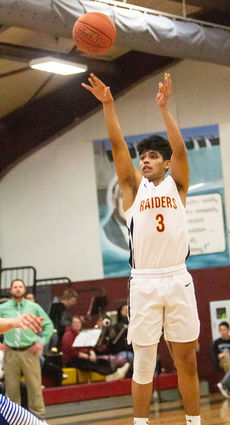 The Raiders demolished the Soap Lake Eagles on Friday in an overwhelming victory.

Tyler Jordan tipped the ball in the Raiders favor to start the game and Cameron St. PIerre scored the first points with a layup.

The Raiders got the ball back quickly, and Hunter Whitelaw scored a layup to put the Raiders up 4-0.

Jonathon Cante led the Raiders with 25 points, followed by St. PIerre with 12; Jordan with 10; Tyson Nicholson with nine; Kyle Edmo with eight; Sam Wapato with seven; Whitelaw and CJ Saxon, who each had four; Soarin' Marchand, who had two; and Adam George who scored one.