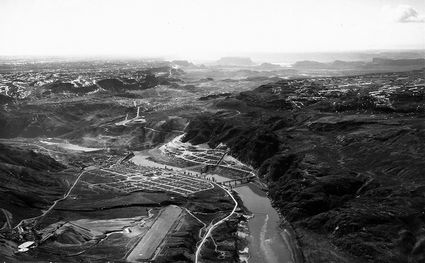 A photograph of the Mason City Airport taken on March 16, 1937 shows the airport at the bottom.

Talks of an airport to serve the Grand Coulee Dam project began soon after work on the "Low Dam" began in July 1933. The airport would be located at Mason City near the sand pile with the runway extending north-south along what is now Central Drive and Camas Streets. Work on the airport began in January 1934 with the completed gravel runway being 3,500 feet long by 400 feet wide. The first plane to land was from the Washington National Guard, landing on March 3, 1934. Following runway upgrades, a plane landed carrying a Spokesman-Review news crew covering President Roosevelt's visit to the dam on October 2, 1937. Another significant event occurred on May 19, 1938, when the airport hosted its first airmail delivery. I obtained an airmail letter originating from Mason City on that day several years ago. The letter was addressed to a pioneering Douglas County family. With encroachment of Mason City housing and the nearby sand pile becoming larger, the airport would close in the early 1940s. By 1945, construction on the Airport Housing Addition to Mason City would commence, consisting of dozens of homes built atop the runway.