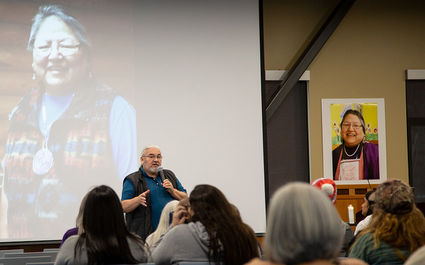 A woman who helped generations of members of the Colville Tribes pursue their educations died in a crash Friday night just north of Coulee Dam.

The Confederated Tribes of the Colville Indian Reservation held a remembrance event Tuesday in the auditorium of the Lucy F. Covington Center after the unexpected passing of longtime employee and tribal member Gloria Atkins. She was 70.

"I've known Gloria my entire life," lamented Colville Business Council Chairman Rodney Cawston. "To not have her here, among us, in all places and in all times is a huge loss for our community."

Nearly 100 employees took part in the remembrance, sharing stories of her more than 45 years in the tribal Education Department, where as its higher education director she served about 150 students a year.

"She was the matriarch of the Colville Tribes," Cawston said. "She has helped so many."

Atkins had been headed north about 7:30 p.m. on SR-155 when the wheels of the Chevy Equinox she was driving left the roadway on the right. She corrected, turning left, then once again to the right before the vehicle rolled, a Washington State Patrol investigation found.

It came to rest on its top on the northbound shoulder.

She was wearing a seatbelt.

At the conclusion of the memorial event Tuesday, tribal administration offered services for colleagues. Grief counselors were available onsite.