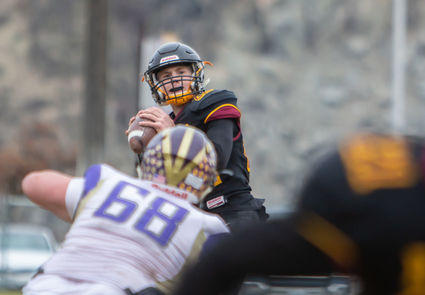 Hunter Whitelaw looks for a receiver in the biggest passing game of the Raider season Nov. 16 in Coulee Dam.

Lake Roosevelt's Raiders won the day in their first round of the state football playoffs Saturday in Coulee Dam, besting Friday Harbor 19-14, but losing a key player in the process. They'll play next week on the west side of the state at a time and place to be determined.

The Lady Raiders volleyball team competed against two teams at the state tournament in Yakima Thursday, losing to each in four sets after winning the first set in each contest.

Their season is done, but it included being the first LR volleyball team to make it to the state tournament in 28 years.

Look for a full report and photos on Wednesday.