They crossed that bridge when they came to it 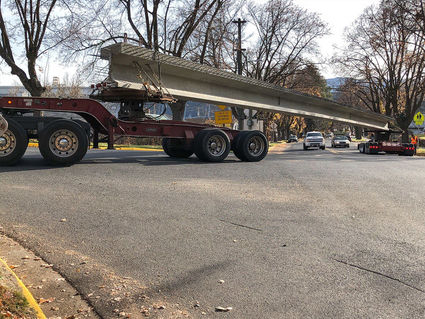 Some onlookers last Sunday doubted it could make the corner heading onto the Columbia River Bridge in Coulee Dam, but the TT Trucking driver pulling the 114-foot girder, for a replacement bridge on SR-21 between Keller and Republic, made it across. - Scott Hunter photo

Bridge girders heading toward the West Fork area of the San Poil river along highway 21 between Keller and Republic crossed the bridge at Coulee Dam recently.

The girders, six in total, each measure 114 feet long.

The former bridge at West Fork washed away in the spring of 2017, at which point a single-lane "Bailey Bridge," a type of bridge constructed for World War II, was put there to allow...