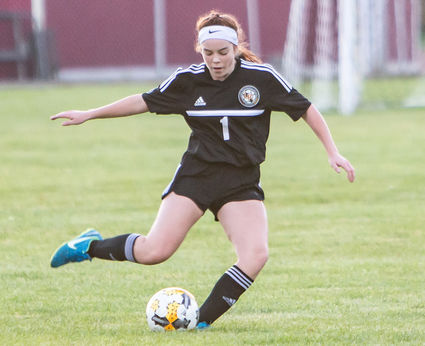 The Lady Raiders earned two decisive soccer wins last week, defeating both the Oroville Lady Hornets and the Pateros Nannies, and are now heading into the postseason.

The Lady Raiders defeated the Lady Hornets 7-0 in Oroville on Oct. 22, where Sadi Trotter, Madisyn Toulou, and Bryn Chaffee each scored two goals, and Jasilynn Schilling scored another.

"Oroville was a good learning experience for some of the forwards," Head Coach Micah Esmond said. "We had 14 shots at goal from Jasilynn and Sadi for the first half."

"Once we got a comfortable lead in the Oroville game," Consultant/Trainer Randy Semanko said, "it allowed our girls to practice possession by quick passing and moving into open space, with more comfort in a game situation. Something we haven't been able to do in previous games."

Then in Grand Coulee on Oct. 24, the Lady Raiders defeated the Nannies 9-4.

Toulou scored an impressive nine goals, while Schilling and Chaffe tacked on two each, and Trotter scored one.

"Pateros was a special since it was senior night for Madi and Ida," Esmond said. "Madi was able to score that unbelievable header that she has been wanting so much. Jasilynn set up that goal with a cross that left us all in shock. Everyone played great, and we all had fun. ... Both victories were great for the team."

Semanko added that Toulou's header, hitting the ball into the goal with her noggin, was possibly the "play of the year."

"It was very nice to see all the hard work the players and coaches have been doing come to fruition," Semanko said. "It's like something finally clicked."

The Lady Raiders were scheduled to play against Liberty Bell yesterday, results of which will be reported in next week's Star.

Bryn Chaffee battles through defenders against the Nannies. 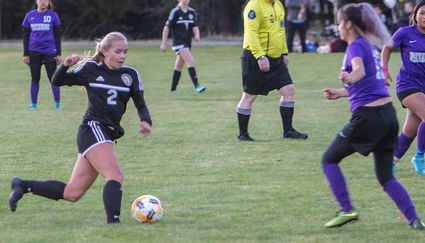 Bryn Chaffee battles through defenders against the Nannies.