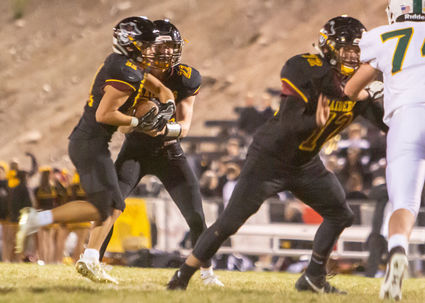 The Raiders shut out Northwest Christian in Coulee Dam under the Friday night lights where a light rain likely didn't help the Crusaders' mood in their 43-0 defeat.

The Raiders got on the board first on a fourth-down play with eight yards to go, when quarterback Hunter Whitelaw connected with Malachi Rasmussen on a touchdown pass, followed by a two-point conversion run by Cameron St. Pierre that put the Raiders up 8-0.

The Raider defense held the Crusaders back, forcing them to punt back to LR.

Whitelaw kept the ball and ran, taking the Raiders to the five-yard line. St. Pierre finished the drive, running into the endzone for another touchdown, and Rasmussen caught another two-point conversion for LR.

The second quarter saw St. Pierre run a touchdown on fourth and one, and later a long run from Whitelaw led to another St. Pierre touchdown rush.

Gabe Waters caught a 28-yard touchdown pass from Whitelaw with 39 seconds left in the half.

"Airmail!" announcer Aaron Derr said while the ball was still in the air.

Whitelaw had a five-yard touchdown run in the third, and the game finished with a final of 43-0.

Whitelaw threw for 196 yards, including two touchdowns and a long pass of 37 yards.

Brit Egbert threw a 10-yard pass at quarterback, as well.

Rasmussen, as well as Devon Hobrecht, led the Raider defense with 10 tackles each, followed by Cole Palmer, who had nine.

"The defense pitching a shutout was huge," Head Coach Tim Rasmussen said, adding that Whitelaw had a standout performance, and that St. Pierre has 17 touchdowns for the season between rushing and receiving.

The Raiders next game is scheduled for Oct. 25, at home in Coulee Dam, at 7 p.m. against the Tonasket Tigers during the Raiders' "Senior Night."