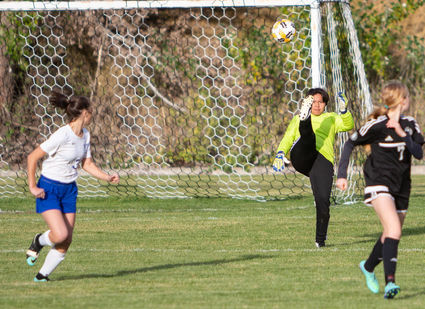 The Lady Raiders took a couple losses on the soccer field last week, one against Brewster and one against Tonasket.

Lake Roosevelt lost 7-3 Oct. 15 against the Lady Bears in Brewster.

"Brewster was a match with a lot of good fighting spirit," Head Coach Micah Esmond said. "Our forwards are starting to link up much more with the midfielders and fullbacks. We ended up getting punished for our individual mistakes. I am noticing that those mistakes are less and less."

"We were able to control the ball a little more with quick passing and runs, but it was our second game in a row that we allowed seven goals," said Coordinator/Consultant Randy Semanko.

Semanko also named Bryn Chaffee the player of the game on the team's page on the Maxpreps website.

"I don't usually name a player of the game, but today was an exception," Semanko wrote. "Bryn played a great game today. We only had nine players, as usual, and Bryn sacrificed her normal position and scoring opportunities to help her team at a defensive position. Bryn not only showed unselfishness, she hustled every single second of the game."

Toulou scored LR's goal off of a Chaffee assist.

At goalie, Ida Sue Dick had four saves and Kyona Edmo had six.

"Tonasket was an ugly and unfair match," Esmond said, citing uncalled fouls and more. "It was a horribly biased officiated match."

"The Tonasket game was tough, as league-leading Tonasket is a very good team with skills and speed," Semanko added. "We were not able to control the ball very well, and we were on our heels defensively the entire game." 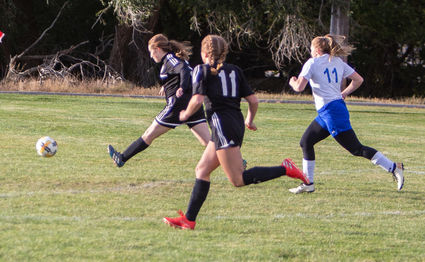 Semanko took responsibility for the loss. "The coaching staff is not giving the girls the proper tools to correct the mistakes we are making game after game," he said. Myself and the rest of the coaches have to step up and do a better job of recognizing the deficiencies and getting the players game ready. We can blame the dirty players and dirty referees all we want, but in the end, the game results are the responsibility of the coaching staff and how well they have prepared the players. We will do a better job from here on out!"

A game was scheduled in Oroville for Oct. 22, results of which will be reported in next week's Star.

The Lady Raiders will host Pateros this Thursday at 5:30 p.m. Then meet the Lady Mountain Lions in Liberty Bell next Tuesday, Oct. 29 at 4:30 p.m.