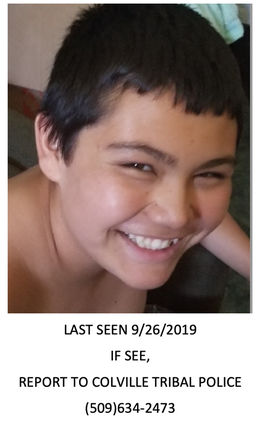 Cathy Covington has placed this poster around the community in search of her grandson.

The grandmother of a 14-year-old boy is asking anyone who sees him to report it to Colville Tribal Police.

Cathy Covington says she's been raising Javante Picard since he was 3 years old and that he's had problems at school, with plans put in place to help him.

But on Sept. 26, she says, someone picked him up at the bus stop, and he didn't make it to Lake Roosevelt Junior Senior High School. She hasn't seen him since but believes he's near Nespelem.

Covington has contacted tribal police and has posted his photo publicly. She has also been in touch with the National Center for Missing and Exploited Children.