There's gold and silver in them thar coulee walls 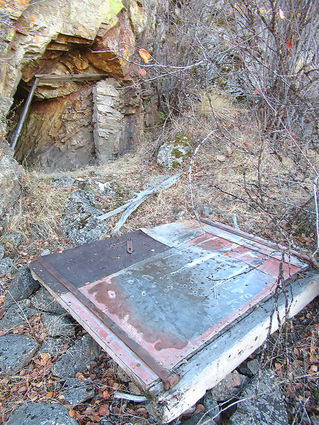 In the 1930s, the coulee walls behind Electric City and Delano were being prospected for gold and silver. These deposits occurred near the base of the Coulee Wall, in granite, overlain by basalt. The land was owned by James O. Black of Electric City and Joseph Rosauer of Opportunity Washington. Rosauer was a Spokane grocer whose family would form the beginnings of the Rosauer's Supermarket chain in 1934. These men would form a mining company and develop a mine called the "Black-Rosauers Mine, Inc". Assays of ores from this mine averaged 37.7 ounces of silver and 0.02 ounces of gold per ton. This mine produced small amounts of ore in 1937, but nothing afterwards. The mine consisted of a 30-foot adit (horizontal shaft), with a 100-foot long inclined shaft and a large metal door at the entrance. More prospecting would be conducted along these coulee walls, and two other ore prospects were soon identified in the granite walls: "Hope No. 1" and "Silver Queen," both consisting of 30-foot adits. These mines sit mostly on private lands, and nobody should attempt to enter as they are unstable and dangerous.