Local outcry had been against decision 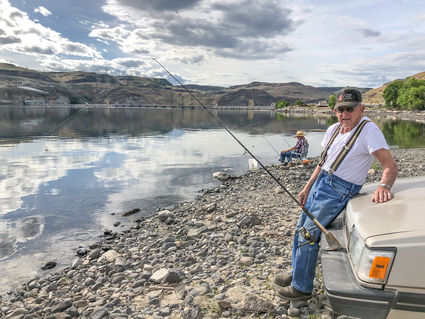 Earl Mustard fishes at Geezer Beach within feet of the shoreline Monday. Mustard, nearly 90, has screwed a pole holder onto his Subaru's bumper for that purpose. He said he'd tried fishing from a spot on the opposite shore earlier in the year, but ended up falling on rocks, which laid him up for several days. - Scott Hunter photo

Despite overwhelming public opinion against the idea, the U.S. Bureau of Reclamation has chosen to ban vehicles from parking on Geezer Beach, located behind the Third Powerhouse of the Grand Coulee Dam.

A press release Monday from the bureau announced the decision, emphasizing "safety" as their reason for banning vehicles from the beach popularly fished by elderly anglers who have heretofore a...