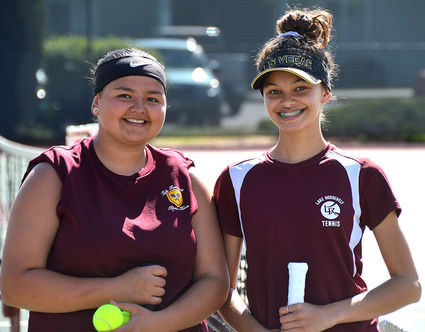 The North Central Washington Athletic Associations 1A/2B/1B District 6 tournament was held May 15 in Manson and May 18 in Omak.

The girls qualified for the event by placing in the top four of the league tournament.

Alexia Ryan, a junior at LR, faced off against Molly Wiser from Cascade in Manson. "She played well but lost 6-3, 6-3, which put her on the consolation side of the bracket," explained Head Coach Steve Archer.

Savannah Hobrecht, a senior at LR, played against the first-place finisher from the A league, Emma McLaren from Chelan."Savannah played well, but lost 6-2, 6-3," Archer said. "She, too, went to the consolation side of the bracket."

"The way it worked out, unfortunately, is Alexia and Savannah had to play each other on Saturday in Omak," Archer explained. "Their match was a good one and a loser-out situation, which both girls wanted to win to advance in the tournament."

Rainy Vargas and Keziah Stice played against the first-place finisher from the A-league tournament and eventual champions, Kert and Kert from Cashmere, losing 6-0, 6-0.

In another instance of teammates facing off against each other, Raven Clark and Tarissa Clark defeated Vargas and Stice 63, 62.

"Raven and Tarissa advanced to play Okanogan's doubles team of Wyllson and Perez," Archer explained. "Early in both sets the score was tied, but in the end the losing score was 6-3, 6-2, putting our girls out of the tournament tied for fifth place."

"This is the most girls we have ever advanced to district play," Archer said about the six athletes. "Our team represented one quarter of the total participants in their individual event. I was very proud of each one of them. It was an excellent season for both girls' and boys' tennis. Lots of good wins and good memories."