Out with "archaic," in with new tech tools at Lincoln County dispatching center 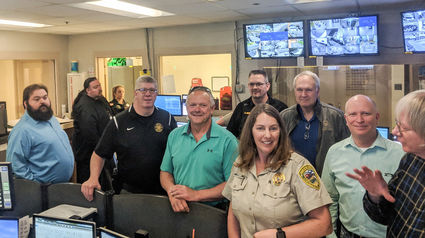 Sheriff Wade Magers, county commissioners, dispatchers and others were on hand as the new dispatch center "went live" without a hitch last month.

As Sheriff Wade Magers, several of his staff, two county commissioners and computer personnel held their collective breath on the morning of April 23, the Lincoln County Sheriff's dispatching center's new technology "went live" and the system that was first installed in 2004 was shut down.

Everything worked as expected, giving communications deputies who work inside the dispatching center the benefit of the latest equipment as they take calls from the public requesting law enforcement, fire and emergency medical assistance. The new system also went live on the road deputies' computers inside their patrol vehicles.

And the best part: it was a seamless transition, with the first caller assisted with the help of the new technology noticing no interruption in service.

Inside the dispatching center, though, smiles appeared on the faces of those who had worked on the transition, and congratulations were exchanged.

The transition to what's known as the "Spillman project" has been in development for the better part of a year.

"Our computer system was extremely old and archaic, but we depended on it for everything we do from the first 9-1-1 call to the conclusion of all calls for service," Magers commented.

With the new system, dispatchers will utilize a built-in list of questions keyed to specific crime calls and requests for assistance as they talk with callers. The software automatically generates reports and records, which can be accessed by the communications staff and road deputies as well. Detailed maps on the individual monitors at the three stations and the large wall-mounted "Mondo" unit inside the dispatch center, as well as on the computers inside each road deputy's patrol vehicle, will help them get where they need to be even faster.

Last year, funding for most of the project was placed in the state budget, allowing the county to proceed with the transition. "This was unheard of, as far as I know, and at the very least very rare," Magers said. "Because of the hard work of the county commissioners, specifically Chairman Rob Coffman, who worked with state Rep. Tom Dent and Sen. Judy Warnick, this became a reality."

The sheriff detailed how the acquisition of the new technology was a real team effort.

Once funding was secured, Magers and his staff began looking at numerous vendors and visited several agencies to look at different products. "We researched everything we could in the public safety software realm," he said.

Jo Borden, the county's 9-1-1 coordinator, was assigned as lead and project manager.  "She has worked relentlessly on this project," Magers said.

Once a contract was signed with Motorola, which had acquired the Spillman product, the work began. Over the past year, infrastructure was made ready to take on the new project.

the help of Brad Hudson, the county's information technology chief, and his team, Andrew Rustad and Michael Kneff, software and other technical equipment was ordered. A calendar was created with the Spillman staff that laid out the next many months with goals and objectives to prepare for the transition.

At that point, Borden and Lyle Hendrickson, jail superintendent, "began the heavy lifting," Magers continued. "They began the process of hours and hours of work entering data and everything behind the scenes.