Park commissioners meet … at the park

Taking a fresh look at possibilities for North Dam Park 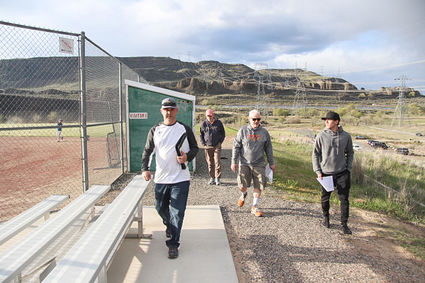 Commissioners from the Coulee Area Park & Recreation District met at North Dam Park April 30 to walk around the park and discuss aspects of it, future plans, and talking points for an upcoming meeting with the Bureau of Reclamation, which owns the land, and for which CAPRD manages the park.

The group toured the concession stand at the upper ballfield and suggested new locks as well as putting up a sign-in sheet for the connected bathrooms to show when they had last been cleaned.

The playground they envision being brought up to modern standards, with a type of foam floor rather than gravel on the ground, and with new equipment.

The group talked about how green plastic piping, donated by the bureau, helps line the tops of fences at the ballparks so outfielders don’t hurt themselves when reaching for a ball, and discussed the need to finish lining the fences with it.

Portch looked at an empty patch of land underneath power lines north of the current ballfields and wondered if that could be a soccer field and a third ball field, which he said means the park could host a regional tournament.

“That would put heads in beds and people in restaurants,” Valen said about the draw regional tournaments could have to the area.

Also discussed was removing concrete benches downhill from the gazebo that once sat before a small outdoor screen but now faces nothing but empty space. They also talked about keeping the benches above and facing the gazebo.

A Coulee Corridor Ice Age Floods kiosk, explaining the history of that phenomenon, is said to be planned for near the “hobo kitchen” picnic area.

A community garden is something else people have expressed interest in, but wasn’t allowed by the bureau because they say the park first needs to be made fully compliant with the standards of the Americans with Disabilities Act.

CAPRD has been working on things such as installing handicapped parking spots, and will need to make sure the grades of trails, and more, are up to those standards.

A 10-year contract between the bureau and CAPRD is running out at the end of the year. The group wants to bring certain items to the bureau’s attention, as well as to decide if they’d rather do a five-year contract this time around.

The group would like someone from the Bureau to meet with them at the park in the future, and to hold more of their own meetings at the park in general, particularly with the days being longer and the weather nicer this time of year.