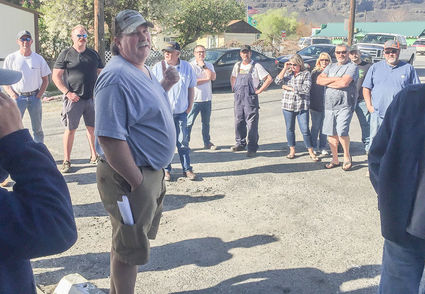 Fire Chief Mark Payne, center left, meets with a crowd of supporters outside city hall after telling Mayor John Nordine he'd rather meet in a public setting regarding a disciplinary notice he got from Nordine. - Jacob Wagner photo

A peaceful, but angry, group of about 40-50 people gathered outside of city hall in Electric City Wednesday afternoon in support of Mark Payne, the city's fire chief, who is facing disciplinary action regarding holding wildland fire-training exercises without a permit or the mayor's permission.

"I am convinced that it is more likely than not that you violated state law in conducting an unauthorized fire training on April 19, 2019, on the Banks Lake Golf Course," says a letter Payne received from Mayor John Nordine, citing Washington state law prohibiting wildland fire fighting training without a permit and the requirement of a detailed training plan submitted to the Department of Ecology prior to such an exercise.

Josh Reeder, senior officer for the city's fire department, explained to The Star the purpose of the wildland-fire training Payne said he has conducted every year for years.

The training teaches "everything from initiating fire, just so you can see how it progresses, to control and extinguishing," Reeder said. "It's actually a requirement to have live fire throughout the year for people to stay certified as a firefighter. With fire season coming, It's always a good idea to be fresh."

Reeder added that the personnel and equipment to keep the training safe were all present.

The letter from the mayor invited Payne to meet with Nordine May 1 for an "informal hearing process" to make his case before Nordine makes his final decision regarding disciplinary action.

"That discipline may include removal as fire chief and termination of your volunteer position with the Electric City Fire Department," the letter states.

Electric City Municipal Code 2.15.040 states that the mayor can recommend removal, but that "such recommendation for removal shall require the confirmation of a majority of the whole council before becoming effective."

Nordine's letter also said that at the meeting "if you have someone accompany you, that person is not entitled to be an advocate."

Payne and a few someones stood in the lobby of city hall and spoke with Nordine about the possible meeting, while another 40 or so stood outside.

At one point, Nordine said he wasn't sure if the discipline would go so far as to fire Payne, to which Payne held the letter in his hand saying the letter sounds like he's being fired.

Nordine spoke on the phone with the city's lawyer and informed Payne that it wasn't a public meeting and that if someone accompanied Payne to a back room to talk to Nordine and City Clerk Russ Powers, it couldn't be the press.

Payne said he wasn't interested in having a private meeting, only a public meeting.

If the issue goes before the city council, Payne could have his way on that. According to the state's Open Public Meetings Act, executive (closed) sessions of councils can take place to evaluate complaints against a public officer or employee, but "upon the request of such officer or employee, a public hearing or a meeting open to the public shall be conducted upon such complaint or charge."

Nordine asked Payne to write a written request for a public meeting, which Payne said he'd do. Then he addressed the crowd of his supporters outside, who included firefighters, former fire chiefs, and other community members.

"I'm not going to let them railroad me," Payne said. "They've tried to buffalo me and bullshit me enough. While all you guys ... here know me, I just won't stand for that. I appreciate you guys coming by."

A date hasn't been set for a public meeting, and it is not certain whether it would be at the next council meeting, scheduled for May 14 at 6 p.m.

Payne urged whoever attends the potential meeting to arrive early to sign up to speak.

Payne told The Star after addressing the crowd that firefighters are prepared to resign, and that he would join another fire department until there was a new administration in Electric City.