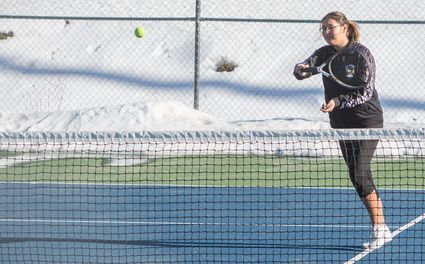 Raven Clark returns a volley in the first game of the year March 19 against a backdrop of snow. The Raider girls' team won 5-0 over Oroville. - Jacob Wagner photo

Raider tennis players had their first week of play, during a week in which the last of four courts were finally cleared of the last of the snow by the Coulee Dam Volunteer Fire Department that Thursday.

Two days before that, using only three of the four courts, the Lake Roosevelt girls won two out of their three games, but the boys lost all three.

The Raiders hosted the Oroville Hornets in Cou...