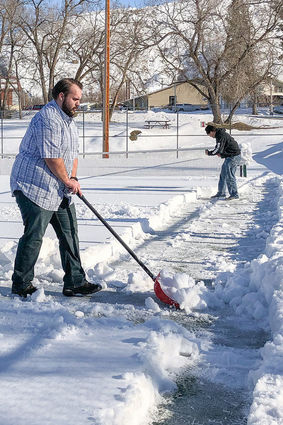 Cody Maldenhauer, left, and Jeff Wilt shovel six inches of snow on the tennis courts at the high school March 8. Maldenhauer and Wilt, who is helping with the tennis program this year, were joined later by Adrian Aspinall. Maldenhauer and Aspinal work with Wilt as electrical engineers at Grand Coulee Dam. Several more inches of snow fell on it the next week, but all the courts had been cleared this week and a tennis game was scheduled for yesterday. - Scott Hunter photo

The long-running winter has made it hard to play spring sports, meant to be played on grass and dirt, not ice and snow.

The snow has canceled several of the first events scheduled for each of the five spring sports: tennis, golf, baseball, softball, and track...