Geologist to give free presentation Saturday 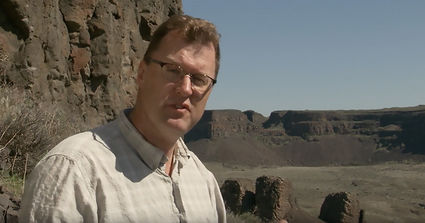 In a screenshot from YouTube, Nick Zentner talks about Dry Falls in an episode of TV's "Nick on the Rocks."

Geologist Nick Zentner will be making a free presentation related to the coulee area at the Grand Coulee Dam Visitor Center March 9 at 1 p.m.

Zentner hosts a series called "Nick on the Rocks" that has aired on PBS and is available on YouTube. Zentner, a professor of geology at Central Washington University, is being sponsored for the local visit by the Grand Coulee Dam Rotary Club.

"We know when and why the coulee was carved," Zentner told The Star, "but we're still looking for clues as to how many floods there were. There are also amazing, huge, giant lava flows that buried much of eastern Washington. I'll be talking mostly about new stuff that geologists have found along these two lines."

Zentner received the James Shea Award in 2015, a national award recognizing the exceptional delivery of earth science to the general public.