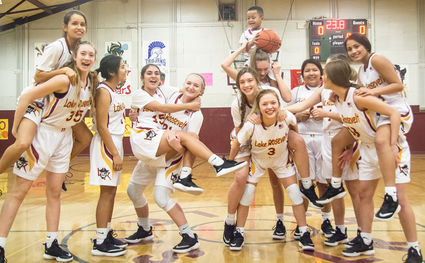 The Lady Raider varsity team has some fun after first taking "serious" team photos last week. From left are Hannah Wapato on the back of Audrey Hansen, Kyona Edmo, Jozlyn Hansen in the arms of Kelsie Olbricht, assistant coach Roman Pleasants on the back of Ellie Hansen, who is behind Addison Hansen, who is on the back of Shantana Pakootas; Allison Nomee, partially obscured Cassidy Reyes, Lily Clark, and, on Clark's back, Almeta Desautel. - Jacob Wagner photo

The Lady Raiders soundly defeated the Lady Hornets 71-19 in Oroville on Friday.

Lake Roosevelt is fourth in the Central Washington 2B league with an 8-3 league win-loss record, 8-5 overall.

LR was scheduled to play the Tonasket...