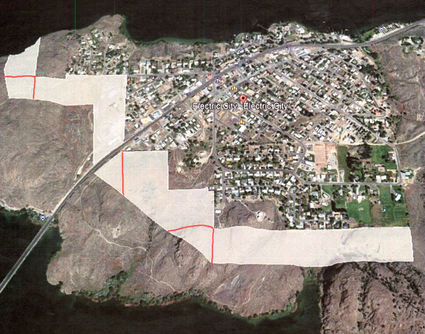 A proposed buffer zone where no hunting or shooting would be allowed is shaded lightly in this photo, included in a city council information packet. Currently, Electric City law does not allow hunting inside city limits, but the restriction reportedly conflicts with hunting allowed on lands owned by state and federal entities within the city's boundaries.

A 500-foot-wide, 7,281-foot-long, no-shooting "buffer zone" is being proposed between residences of Electric City and the Osborne Bay area.

The buffer zone would be an area people cannot shoot guns out of or into.

City Clerk Russ Powers said the city has had several complaints regarding hunters behind houses on Silver Drive, and that just last week he saw people with high-powered rifles in the...