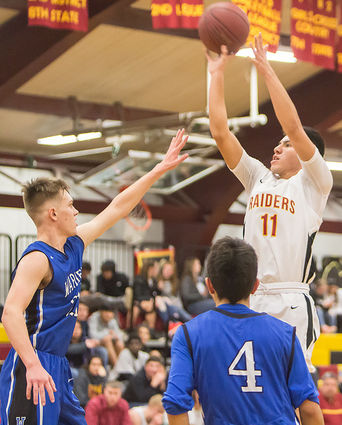 Trevor McCraigie fires off a jump shot against Warden Saturday. The team captain just got into action this week, coming off an injury sustained in the last game of the football season. - Jacob Wagner photo

The Raiders suffered two losses, one league, one non-league, but closed out last week with a solid win.

The Raiders are third in the Central Washington 2B league with a 4-2 league win-loss record, 5-3 overall.

Brewster and Oroville are at the top of the league, both with a 5-1, 6-2 record.

The Raiders played in Okanogan in a non-league...