The fix is in 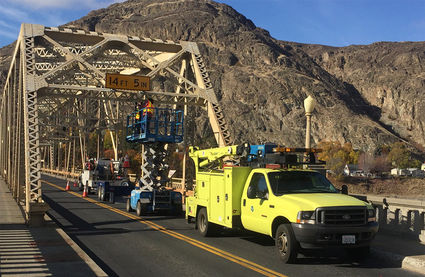 State DOT workers fix the east end of the Columbia River Bridge in Coulee Dam Tuesday. The repair was needed after an overheight vehicle hit the "end portal," a piece of steel that had to be removed on Monday, taken to Wenatchee, and a new one painted and installed on Oct. 30 by the regional bridge crew of the Department of Transportation out of Wenatchee, explained Ryan Smith of the local DOT. Tony Gillin, bridge maintenance supervisor for the North Central Region of the DOT, said the unknown accident was reported about two months ago by someone at the Electric City DOT who noticed the damage on the way to work. - Jacob Wagner photo