Authorities: bad fire could have been worse 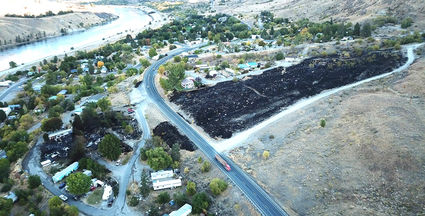 A photo of the burned area in Elmer City, taken from an unmanned aerial vehicle the next morning by Maurice Goodall of the Okanogan County Emergency Management.

A fire that destroyed four homes in Elmer City last week left the fire chief thankful for his neighbors, who he said likely prevented a larger catastrophe.

Okanogan Fire District 2 Chief Dave Finch said some 41 firefighters from every local department were in Elmer City Tuesday night to fight the fire that started about 6 p.m. in high winds in the Grand View Trailer Park just below SR-155.

The first trucks had just arrived on scene when the wind blew the fire across the highway, he said.

Finch said he wasn't completely sure of the number of homes gone in the trailer park because he hasn't learned the outcome of an investigation into its cause being conducted by Colville Tribal Police.

A walk through the area several days after the fire definitely revealed at least two completely destroyed mobile homes with nothing but the bottom steel frame left. Two more spots in the area also appeared to be former homes.

"We stood to lose two more and came very close, but USBR firefighters hopped on it and did a great job," Finch said.

He also noted firefighters from the Mt. Tolman Fire Center "were exceptional" and kept the fire from spreading.

"We could still be chasing that fire to Keller," he said Tuesday. 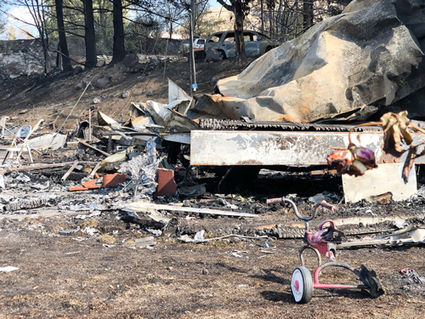 A destroyed home in the Grand View Trailer Park after the fire. - Scott Hunter photo

When the wind shifted to the south about 7 p.m., Finch said, he was grateful for the firefighters who had already stifled the fire.

"If it would have shifted earlier, we would have had a lot more fires," he said. "I appreciate my neighbors. ... We should be proud of our fire community."

Okanogan County Emergency Management Director Maurice Goodall said the high winds that day caused problems all over the county, starting with a power outage from Pateros, up the Methow to Carlton. Then a fire started near U.S. 97 just south of Indian Dan Canyon, burning 70 acres. Next, a fire in Tunk Valley burned a half acre, then another small fire caught near Oroville, all before the Elmer City blaze took off. He noted there were reports of power lines down throughout the county, and even a trampoline that had blown on lines in Oroville.

"We're lucky we weren't in the middle of summer," he said.