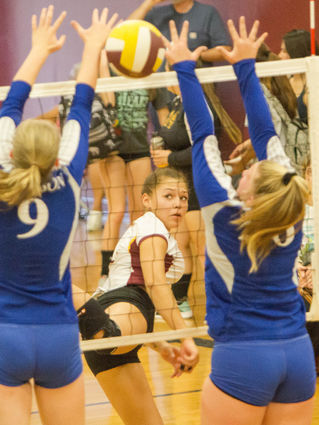 The Lady Raiders lost against Manson but won against Wilbur/Creston in their first week of the volleyball season.

At home on Sept. 6, the Lady Raiders lost 3-1 against the Manson Lady Trojans.

"We struggled with serving, missing 16, and had nine 'in the net' calls," said Head Coach Teri Sue Reed. "That's just giving away too many points!"

But the Lady Raiders had their highlights. Megan Abel made a whopping 17 assists, Ellie Hansen led the Lady Raiders with eight kills, Addison Hansen made a block and nine digs, and Mikaylah Thompson served five aces.

Things fared better for LR against Wilbur/Creston, again at home, on Sept. 8, when they won 3-2.

"LR battled back from a 7-1 deficit to win game five and take the match." Reed said. "Mikaylah Thompson was a dominant offensive force."

The Lady Raiders' next game is on Thursday, Sept. 13, at home against Waterville/Mansfield, with the JV game scheduled to start at 5 p.m. Next, they'll play in Tonasket on Tuesday, Sept. 18, also at 5 p.m.