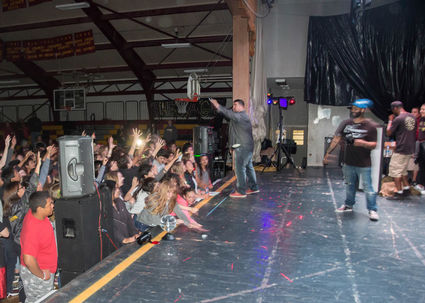 James Pakootas pumps up students for the rap entertainment portion of an assembly last spring, in which they had just heard his and others' stories of misfortunes, mistakes, determination and hope. Later, they filled out the survey. - Scott Hunter photo

An assembly held at Lake Roosevelt in May included stories of how drugs and alcohol can affect someone, as well as rap music, and the students reacted strongly to it all. A survey of the students following the survey has helped enlighten staff to issues the student body is facing, and has propelled them toward helping deal with these issues.

At the assembly in May, James Pakootas spoke about t...