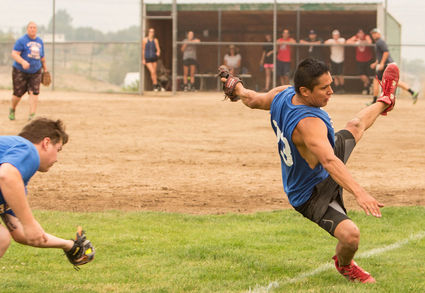 Softball acrobatics Justus DeWinkler, left, makes the catch off a Steve Hansen hit, also attempted by Charlie Joseph, as the two of them dive for the last out of a quarter-final game against the Wannabes Saturday in the summer softball league's Kenny Hearne Summer Classic Tournament. Their ECT team beat the Wannabes 14-9 in that game, but not the tournament.

Inchelium had to beat the Electric City Bar & Grill team twice on Saturday in the championship after losing to them previously in the winner's bracket.

Inchelium came back from behind to win the first game of the championship 13-12. They won the second game 12-9....