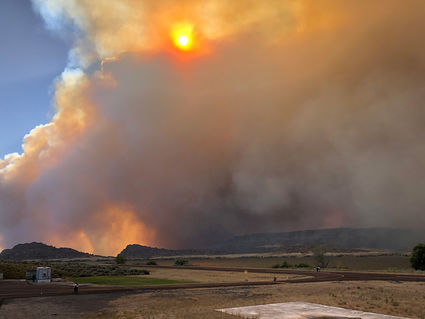 A massive smoke cloud looms over the Grand Coulee Dam Airport and Banks Lake Saturday during the Grass Valley Fire. The smoke was so thick that airplanes couldn't be used to fight the fire because pilots couldn't see to target their drops. Winds were so strong the fire traveled more than 20 miles in eight hours. - Scott Hunter photo

Whipped by wind, a fire that started near the turn to Mansfield Saturday morning sped over grass, sage and stubble, burning one firefighter and threatening homes and property, on its 20-mile race to menacing Grand Coulee and Coulee Dam, parts of which were ordered to evacuate.

Eventually, 247 firefighters would respond from across the state, but the initial attack was up to local volunteers.

Douglas County Fire Districts 3 and 5 were dispatched to a mile east and a mile south of Sim's Corner, the junction of highways 17 and 172 about halfway between Leahy Junction and Coulee City.

It had started at about 11 a.m., and the fire was moving rapidly, spurred by winds of 15-25 miles an hour and gusts over 30 mph in very dry conditions.

Second and third alarms were sounded, calling in help from surrounding communities.

Within two hours the fire had burned across eight miles of land headed north and slightly east, passing highway 174.

Because of the rapid advance, District 3 Chief Dale Rinker said at a community meeting Monday night, an evacuation was ordered of the sparsely populated ranch and farmland north of highway 174 between Leahy Junction and the Columbia River.

Resources were called in from the federal Bureau of Land Management, which had oversight on some of the area. BLM mustered more fire engines, personnel, a dozer and aircraft.

At that time the local districts also asked for mobilization of state resources to fight the fire that was moving faster than the firefighters could lay down a defense.

"We knew we could never stop it," Rinker said, explaining a strategy of "point protection."

"We were going to one home, running the fire by that home, then going to the next home ... just as fast as we could with every resource we had." He noted they cut a lot of fences to let cattle escape.

By about two hours into the fire, more fire fighting personnel and equipment had arrived from fire more fire districts, including Douglas County 1, Okanogan District 8, Douglas/Okanogan District 15, Douglas District 4, near Orondo; and from Chelan County District 1 near Wenatchee.

A retardant airplane and two "Air Boss" water scooper planes were limited by thick smoke and eventually couldn't scoop water from the wind-chopped river, so firefighters lost their air support in the middle of the fire, as it burned another four miles north of 174.

Then the wind shifted toward the east - and toward Grand Coulee and Coulee Dam.

By early evening, the Douglas County Sheriff ordered immediate evacuations along both sides of 174 and north to the Columbia River up to Grand Coulee as the fire had traveled past Barker Canyon Road. The highway was ordered closed.

"They saved our lives," said Suzette Foster, a Strahl Canyon resident, on Monday, who was grateful to see on Sunday morning what she described as 10 trucks and 80 personnel using her driveway area as staging area. "They're amazing."

Foster said she moved to that 320-acre parcel in 2012, just after a similar fire had charred the landscape before threatening Grand Coulee and Coulee Dam.

On Saturday afternoon, a seeming mountain of smoke loomed over the area from Leahy to Grand Coulee, pinching down the sun behind its massive cloud and painting the landscape and Banks Lake in a red light.

Before nightfall, most of the ground north of 174 between Leahy Junction and Grand Coulee was blackened, and a state Type 1 incident management team had arrived to help organize arriving resources and the fight, which would take days and coordination between multiple fire fighting and law enforcement agencies.

Grand Coulee and Coulee Dam residents, warned earlier to get ready, were given evacuation notices as police announced the Level 3 evacuation over loudspeakers and with knocks on doors.

"I know that's a very scary experience for a lot of people," Rinker said. "I actually did an evacuation notice on my own home. It's one of the hardest phone calls I ever made in my life."

Even with the resources devoted to what was now called the Grass Valley Fire, they were far less than what might normally have arrived. Public Information Officer Ben Shearer said Sunday morning that such a fire (at that point about 45,000 acres) might normally command five strike teams, but only one was dispatched from the state because a lightning storm had started many more across the state, and teams were assigned to those.

At Monday's meeting, Leonard Johnson, who was commanding the overall effort, said 14 major fires were burning in the state. This one had a perimeter of 73.5 miles, equal to the distance to Moses Lake plus 6 miles.

Grand Coulee north of the canal spent Saturday night and more in a level -3 evacuation notice, as did west Coulee Dam. Those were downgraded late Sunday and were expected to be lifted by this morning (Wednesday).

As of Tuesday night, the fire, which consumed 75,537 acres, was 87 percent contained, and the state team planned to hand command of the incident back to local firefighters by noon.