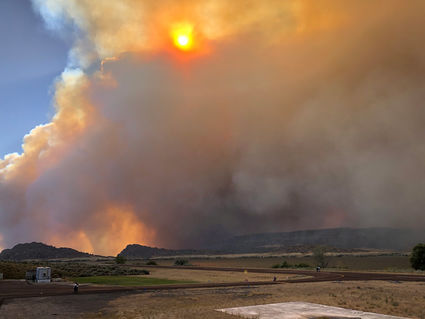 The fire as seen this afternoon from the airport.

GRAND COULEE 8-11-18 — A fire that started about noon near the Sims Corner Junction on highway 17 has closed highway 174 and all residents on both sides of 174 from Road P east to Grand Coulee are urged to leave immediately.

Douglas County Sheriff Chief Criminal Deputy Steve Grossclose said at 6:10 p.m. that the fire is currently past Road Y NE and the Barker Canyon Road on both side of SR-174 and headed northeast driven by strong winds.

Evacuations have been ordered along both side of 174 and north to the Columbia River.

He said most of those evacuation north of the highway have been completed.

He said Douglas and Grant County authorities are coordinating efforts and that they would be knocking on doors for those area that need evacuation.

State fire fighting assistance has been requested, he said, and is likely by morning.

"We're concerned about the fire on the south side of the highway," he said, because that could be driven toward Grand Coulee.

Police are reportedly knocking on doors in Grand Coulee on the north side of SR155 and advising of a Level 1 evacuation, meaning get your evacuation plan ready.