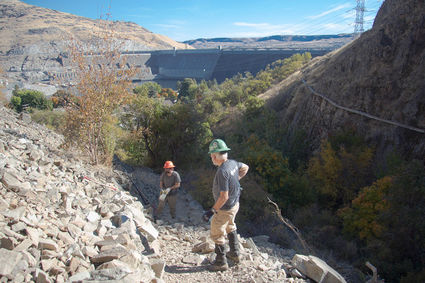 Volunteers from the Washington Trails Association do rock work on the 2.25-mile Candy Point Trail on Sunday, with the Grand Coulee Dam in the background. Around 20 volunteers from as far away as Seattle did "tread work" over the weekend to restore the trail built by the Civilian Conservation Corps in 1937. - Jacob Wagner photo

A solid piece of local history got cleaned up and clarified last weekend so people can enjoy and use it more in the present as volunteers from across the state continued work on the Candy Point Trail in Coulee Dam.

The trail has historical significance, having been built by the Civilian Conservation Corps back in 1937.

Contacted by Coulee Dam's Parks and Natural Resources Board, last year the Washington Trails Association cleared brush along the 2.25-mile trail. It extends from behind Coulee Dam City Hall up to Candy Point, a hilltop with a great view of the Grand Coulee Dam and more, passes near Crown Point Vista, with the option to cut over to it, then down to a residential yard on Columbia Avenue through which public access is granted.

This year, with an OK from the Bureau of Reclamation after it conducted an archaeological survey, around 20 volunteers for the WTA did "tread work" on the trail, helping steady and repair the many stone steps that span lengths of the trail, as well as widening and defining it, clearing rocks, and more.

"It's one of the best trails I've ever seen," said Alan Carter Mortimer, the WTA crew leader on the project. "I've been doing this for 21 years, and ... I was just amazed! It blew me away."

Mortimer said that from a historical point of view, and considering the high quality of the rock walls and steps left by the CCC, the trail that has deteriorated for decades "should be way more popular."

"It's really cool because it goes up to a great view of the dam and everything," he said. "You go up and it's a really great place to have lunch on top."

Fred Netzel is one of the volunteers who helped last week to work on the trail, which passes through the yard of his mother, Carol Netzel, on Columbia Avenue. Netzel said it felt great to work on a trail that his father, Walt Netzel, had been hiking and maintaining since 1949.

"He showed up here in '49 after the trail had been built," Fred Netzel said. "He literally chose to build his house where it is, saying 'I'm gonna build this house right here so nobody can tell me I can't walk across their yard to get to the trail.'"

Carol Netzel still lives in the house at the north end of Columbia Avenue where public access is granted to the trail, as is posted on signs on the property.

Mortimer explained that, while working, he or his crew would find stone work from the CCC under brush or dirt, which gave clues on where to rebuild the trail, taking measures to keep as much of the original rock work as possible.

Mortimer said it would be wise for the community to clear brush annually as needed to maintain the trail, but that the rock work can last decades and can be restored on an as-needed basis.

The end of the trail behind city hall, near the old "steam plant" building (an old shack), needed the most defining so that hikers know where to go and can easily pass through without bushwhacking their way. This part of the trail passes over Fiddle Creek, where the workers have now placed large, flat stones for hikers to step on while still allowing the creek to flow through.

The WTA plans to come back next year to finish the tread work, but anyone familiar with the hike can see that a significant amount of progress has been made.

Anyone wanting more information on the hike can read about it at http://www.gcdvisitor.com under the "Hikes" section.