Where's the smoke from? 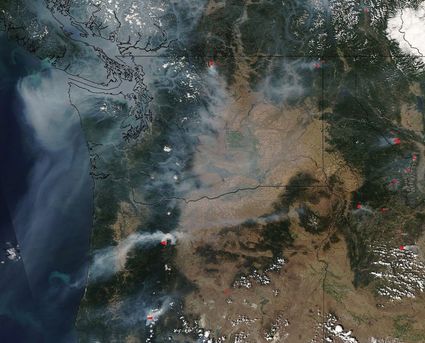 A number of fires are burning in the Pacific Northwest and in British Columbia, the smoke of which has found its way to our area, and all over Washington, and is unhealthy to breathe.

Over 100 fires are reported as burning in British Columbia, including some quite large ones. The main culprits for the smoke from BC appear to be the Hanceville-Riske Creek fires, being managed together, which have burned 331,000 acres; the Elephant Hill fire has burned 207,000 acres; the Quesnel West fire has burned 88,000 acres; and the Tautri Complex has burned 84,000 acres according to http://www.wildfiretoday.com

In Washington, the fires closest to the Grand Coulee Dam area include a 7,100-acre fire called the Diamond Creek Fire burning in the Pasayten Wilderness of the Okanogan National Forest, about 8.5 miles from the Canadian border in North Central Washington, and about 16 miles from the community of Mazama. Also, a lightning-caused, 2,400-acre fire is burning three miles east of Sullivan Lake in northern Pend Oreille County in the Colville National Forest.

Wildfire smoke is not healthy

The smoke in the air isn’t healthy to breathe, especially for children, the elderly or anyone with respiratory or cardiac issues, but even healthy people can be negatively affected by it, according to the Washington State Department of Health. Some symptoms from breathing in too many smoke particles can include coughing, wheezing, shortness of breath, irritated eyes, and more.

Suggestions from the state Department of Health to minimize smoke exposure include:

Check local air quality reports and listen to news or health warnings for your community.

Avoid physical exertion outdoors if smoke is in the air.

If you have asthma or other lung diseases, make sure you follow your doctor's directions about taking your medicines and follow your asthma management plan. Call your healthcare provider if your symptoms worsen.

Stay indoors and keep indoor air as clean as possible. Take the following steps when indoors:

Run an air conditioner (if you have one), set it to re-circulate and close the fresh-air intake. Make sure to change the filter regularly.

Use a high-efficiency particulate air (HEPA) filter to reduce indoor air pollution. A HEPA filter may reduce the number of irritating fine particles in indoor air. A HEPA filter with charcoal will help remove some of the gases from the smoke.

Don’t add to indoor pollution. Don’t use candles, fireplaces, or gas stoves. Don’t vacuum, because vacuuming stirs up particles already inside your home. Don’t smoke, because smoking puts even more pollution into the air.

More information is available online at the Department of Health’s website at http://www.doh.wa.gov, and many other websites.