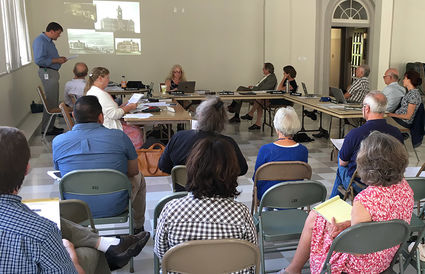 The Washington State Governor's Advisory Council on Historic Preservation met in Coulee Dam Town Hall June 27 to address eight nominations to either the Washington Heritage Register or the National Register of Historic Places.

The seven-member council generally meets three times annually at various locations across the state. Their work is to review and approve selected nominations to either the Washington Heritage Register or the National Register of Historic Places, or both. Last year, the Gehrke Windmill Garden was nominated and is now listed on the state Heritage Register.

Six sites nominated for the National Register will be submitted for listing. Those sites are the Lincoln School in Port Townsend; the Woodinville School, in Woodinville; Point Defiance Lodge and College Park Historic District, both in Tacoma; Government Mineral Springs Guard Station, Stabler; and the Bush House, Index. Each will also be listed on the state Heritage Register.

The Washington State Department of Archaeology and Historic Preservation also seeks nominations for buildings that many consider unimportant. The state manages a unique program, the Heritage Barn Register. At the meeting, three barns were added to the state barn register - one each in Clark, Walla Walla and Whitman counties.

"Barns are a symbol of Washington's agricultural heritage and are beautiful in their own right," Governor Chris Gregoire articulated at the time. "The Heritage Barn Register will support the efforts of Washingtonians who own these barns to preserve and stabilize those icons of our history."

The Heritage Barn Register has been recognized nationally and a few other states have developed similar programs. As part of the program, there is the Heritage Barn Preservation Initiative, which may provide competitive matching grants for barn rehabilitation.

Six million barns existed in 1950, according to the National Barn Alliance four years ago. "Today, 62 years past the 'High Water Mark,' approximately two-thirds of the 1950 barns are either gone or going down."