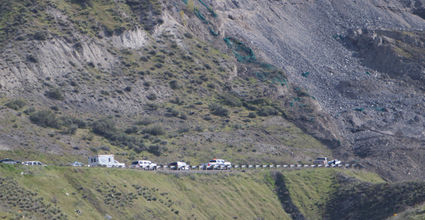 A car and a pickup are stopped at a landslide that closed Peter Dan Road weeks ago, chased there by law enforcement. A tactical response unit and several sheriff cars are also visible, along with one officer standing at the suspect cars.

A high speed chase ended on Peter Dan Road when two vehicles, a car and a truck, both crashed into the landslide that spans the road.

A woman, apparently a nearby resident, told The Star that two suspects then took off on foot, and that police were going to houses looking for them. The resident also said that a SWAT team was on the scene in full uniform with guns drawn. No further info is yet available.

A witness in Coulee Dam said a car speeding down the hill at Grand Coulee Dam hit the bottom of the hill so hard that it "bottomed out and kept flying" about two hours ago, followed by two local police and a sheriff's car.

Update: Sgt. Gary Moore, of the Grand Coulee Police Department, confirmed authorities are looking for multiple suspects in the area.

The Grant County SWAT team happened to be in Grand Coulee today for training, which led to the large response to the scene, Moore said.

He did not have further details on the incident yet and did not know the original reason for the pursuit, but advised that anyone desperate enough to run from police is a reason for concern.

Local resident Shelly Black said one of the suspects crossed their property at one point, as police were staged on the road above. She said that suspect has been caught by police.