Outage affected dam, hospital and about 700 others 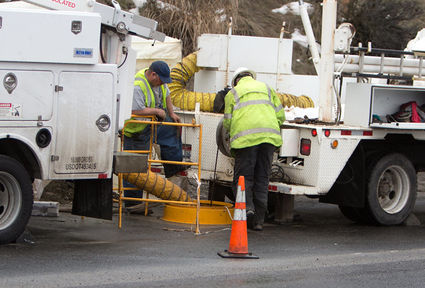 Technicians look down a manhole on SR-155 Saturday, where more CenturyLink workers were laboring for the third straight day on restoring phone service. - Jacob Wagner photo

A telephone service outage for CenturyLink customers in the Grand Coulee Dam area lasted for several days following a power outage centered in in Ephrata.

A spokesperson for CenturyLink said that there had been several phone outages in eastern Washington following an electrical transformer fire in Ephrata Wednesday night.

Coulee Dam's problem seemed to be "pretty much isolated," she said Thursday, and was exacerbated by drenched conditions created by rain and rapid snowmelt.

Not all customers in the area were affected.

Callers to customer support were told it could be a week before a technician could fix their problem, but those customer representatives didn't have specific outage information.

As it was, technicians working underground alongside SR-155 on the Coulee Dam hill worked overnight to restore service as quickly as possible. By Saturday afternoon, most lines were back up.

Zimmer said about 700 customers in the Coulee Dam area were without service, including Coulee Medical Center and the U.S. Bureau of Reclamation.

The telephone outage affected the bureau's Grand Coulee Dam, whose workers could not call in or out of the project, but did have internal telephone systems working.

At Coulee Medical Center, internal phones between departments didn't work, said Director of Communications Melanie Slatina, making for a little more exercise than usual for staff, who had to walk across the facility to deliver messages, or just use email.

Patients were unable to call in, however, but that didn't stop them from getting medical attention.

"People are just coming in, and we help them as they come in," Slatina said on Thursday.

Several other local businesses also reported being without phones.

At the Grand Coulee Dam Area Chamber of Commerce, which buys its service from LocalTel, Executive Director Peggy Nevsimal said her phone was still working.

Contacts at the Tribal Tribune, in Nespelem, had been out of service earlier but reported that it was restored just before noon Thursday.