Soccer wraps up season by winning in a shootout 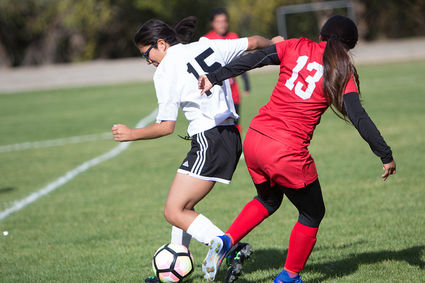 The Lady Raiders lost on Saturday to Brewster, but won in a shootout on Monday in Manson, finishing their first-ever season at 3-8.

The Lady Raiders lost 5-0 on Saturday to Brewster ... a loss, but nonetheless an improvement over their 11-0 defeat to the Lady Bears earlier in the year.

"They played what I consider to be their best passing game," said LR Head Coach Casey Moore.

"Bryn Chaffee had a phenomenal game along with Kayla St. Pierre," Moore continued. "All in all, I'm very pleased with the game despite losing."

Monday's game in Manson was a nail-biter, but the Lady Raiders emerged the victor in a shootout.

Manson scored first, late in the first half, but LR freshman forward Maddie Toulou scored off a corner kick in the second half to tie up the game.

The two teams went into overtime tied at one goal apiece, and after two scoreless five-minute overtime halves, went into a "shootout," in which each team takes five shots on the opponent's goal.

"We switched goalies for the shootout, putting Maddie Toulou in as goalie for the first time all season," explained Coach Moore. "Maddie played incredibly well under pressure and was able to successfully block three of the five goals from Manson, winning the game 1-1, 3-2."

Moore highlighted some of her players: "Goalie Chelsea Timentwa really stepped up last night [during regulation play] and had eight solid saves, including a dangerous direct free kick. Hannah Wapato had an excellent game at mid-field along with Bryn Chaffee. Lomo Moore was able to come back from her ankle injury and played extremely well."

Saturday's game against Brewster was the last home game of the season for the Lady Raiders, including seniors Maya Milk and Tristen Adolph.

"They are a team through and through and they push themselves for each other," Moore said. "It's been an amazing experience watching them progress together."