Volunteers from across the state work on Candy Point Trail 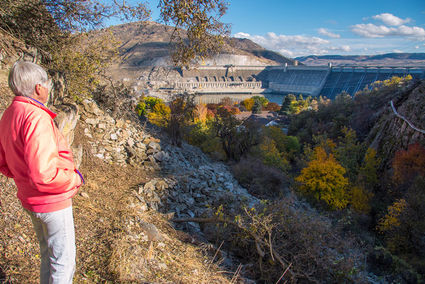 Town Councilmember Gayle Swagerty overlooks part of Candy Point Trail behind the town hall, where volunteers from across the state had just finished clearing brush Saturday.

Coulee Dam's Candy Point trail is getting a makeover from the Washington Trails Association.

This past weekend, 10-15 volunteers from all over Washington worked on clearing brush along the Candy Point Trail, starting behind town hall, where a lesser-known trailhead has become overgrown with brush over the years. Workers pruned branches and hauled them back to the trailhead, where the vegetation awaited wood chipping by the town crew before being hauled off.

The trail was built in 1937 by the Civilian Conservation Corps. The trail loops from behind town hall up to Candy Point, with the option to go over to Crown Point Vista before heading down the many stone steps that make up this leg of the trail, ending behind a residential backyard in Coulee Dam.

The trail was worked on in the late 1980s by the local Rotary Club, and the late Walt Netzel used to keep brush pruned back on much of it, hiking from his home at the other end the trail, where his wife, Carol, still lives. Since then, not much maintenance has occurred on the historic trail.

"It's great to get to work on this decades-old trail. It's built well; it's just been neglected all these years," said Marty Barney, assistant crew leader on the WTA project.

WTA crew members traveled from as far as Anacortes, Washington, six-and-a-half hours away, to work on the trail after WTA Crew Leader Allen Mortimer OK'd the project upon seeing the trail for himself earlier this year.

With the brush now cleared, the next step will be for the Bureau of Reclamation to conduct an historical and archaeological survey, then give the go-ahead to work on any sculpting of the land this spring when the WTA volunteers plan to return. The work to be done then would include tread work, resetting stones, and making the tread the proper width. 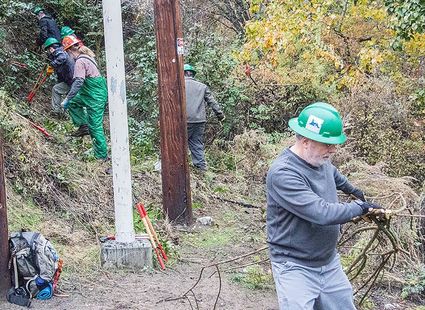 "The ultimate goal is to bring the trail back to really good condition so that the public can utilize it without any hassles, such as going through the jungle growth and wondering where the tread is," said Bob Valen, who is on the Parks and National Resources Board in Coulee Dam that brought the project to fruition. "It's a really neat trail, and I hope it becomes one of the jewels of the area."

You can read more about the trail online at gcdvisitor.com . The trail loops around to another trailhead toward Crown Point, and continues to the other end of the Candy Point Trail, which ends in the Netzel's yard on Columbia Avenue just past the Coulee Dam Federal Credit Union.