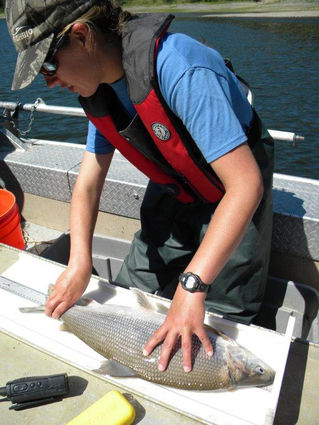 A crew of six tribal fisheries staffers are working on the Sanpoil River from mid-May to July to catch as many walleye and smallmouth bass as they can in hoping to improve redband rainbow trout and kokanee runs.

The work is part of a "Chief Joseph Kokanee Enhancement Project" that began in the spring of 2011 and is expected to continue through 2017, a press release from the Colville Tribes' Fish and Wildlife Department states.

"Every fish we catch gets weighed and measured," said Shay Wolvert, kokanee biologist for CTFW. "The walleye and bass are checked for coded wire and PIT tags to see what they've eaten. We catch them by using gill nets, which are 200 feet in length and six feet wide. We use two boats and each boat checks 10 nets a day."

In 2013, staff removed approximately 3,000 non-native fish between May and July with gillnets and boat electrofishing in the Sanpoil River. They expect to have a similar catch rate this year. "We set nets during the day and shock the fish at night," said Charlie Joseph, fisheries technician for CTFW. "The shocking doesn't kill the fish, it stuns them; this allows us to capture our target fish and we let the native fish go. Night time is usually the most successful time to electrofish because fish are active and near the surface."

"We have been able to reduce the concentration of walleye and smallmouth bass in the Sanpoil River during the critical out-migration period of redband rainbow trout and kokanee salmon," said Holly McLellan, fisheries biologist for CTFW. "The objective is to suppress these fish during this sensitive period so that juveniles have an opportunity to escape predation and reach the Lake Roosevelt reservoir. The overall goal is to increase redband rainbow trout and kokanee abundance in the reservoir and in the Sanpoil River to support tribal and recreational fisheries."

In January of this year, fisheries staff planted one million kokanee eggs in the Sanpoil River. At the end of August, the crew will do surveys on adult fish returns.