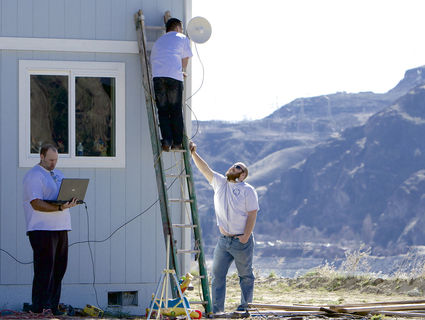 From left, Brad Oliver, Victor Camarena and Micah Seekins install a new connection and relay at the home of Cory Christman on a hillside north of Elmer City. Christman said it was taking him 10 minutes to download a Youtube video. Download speeds were nearly 1,200 percent faster after the install. - Scott Hunter photo

A group of friends trying to scratch their own itch for faster Internet connections have been almost forced into opening a new business to answer the same growing need for the local community.

Coulee Internet Services Company is adding connections every week with wireless-to-fiber technology that extends the reach of faster Internet speeds to places too remote for fast access wires to reach. And their plans include adding even areas now served by fiber optic and DSL connections.

Living in Elmer City, Micah Seekins, a self-described geek who wanted the kind of speeds not available there, started looking for a solution that would let him download hi-def video and play Xbox games at home in Elmer City.

With the cost of building out a fiber network astronomical, a direct line to the house wasn't an option, but a solution built with microwaves could be.

He contacted a friend who had fiber in his home above Crescent Bay. That's high enough that you can see Elmer City from there, a straight shot for microwaves, simply a wavelength of light. His brother, Jeremiah Seekins, is a mechanical engineer helping to teach math at Lake Roosevelt High School and working on getting a masters degree in education. They put up a tower (more like a fence post, Micah says) to send the signal.

After some fine tuning, Micah had Internet speeds the envy of Elmer City residents who knew about it. They wanted in.

At about that time, in 2008, Brad Oliver moved back to town from California and was talking with his parents about the need to expand Internet access to their living area near Spring Canyon, beyond the reach of Grant County PUD's fiber network. He was researching what it would take to start an Internet Service Provider business. Longtime friends, who had attended Lake Roosevelt at the same time and attend the same church, he and the Seekins brothers got together.

As of Tuesday, the young company had 76 customers and a service area that reaches from Belvedere up the Columbia River to Plum Point and Grand Coulee. They're about to launch service to Northshore Acres and are looking for a potential customer in Electric City who would like a discount for providing a spot from which they can relay their signal.

"A lot of times you're helping out people you know, which makes it even better," Oliver said.

He said they've added 16 customers in the last three weeks, four on Tuesday. With a goal of providing service to underserved areas, they hope to expand into the McGinnis Lake and Buffalo Lake areas and up to Nespelem.

"People need Internet, these days," said Micah, a former nurses aide at the hospital who quit his job and is now working double time on installs.

Brad, who is working on a bachelor of science in network administration, does financials, invoicing, licenses, taxes and other paperwork duties. Jeremiah works out the details on adding new relays to expand the network. Also with the company are David Walsh, still in school at Central Washington University, and Victor Camarena.

"We do each other's roles, but we kind of have a set strength that each of us is good at," Brad said.

The company's goal is to provide the kind of service each of them want: enough to download high definition video and play games over the internet with very low lag times. Most customers are seeing around 20 megabits per second bandwidth (they guarantee five), with pings far faster than what's needed, for either $40 or $45 per month.

This fall, they plan to open an office in Grand Coulee. Until then, Oliver said, he will conduct tours of the dam for the Bureau of Reclamation to earn a little more money.