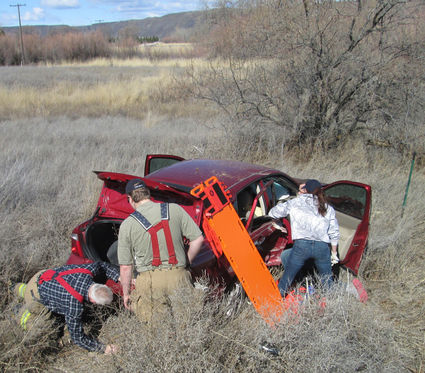 Medical and police personnel check on a female passenger in a car that crashed through the highway guardrail at the south end of the causeway in Electric City Thursday morning. - Roger S. Lucas photo

A driver who told police he was homeless and driving his father's car fell asleep and crashed through the guardrail at the south end of the causeway in Electric City last Thursday morning.

Ira Wolash Wyena, 41, was not injured but a female passenger was taken to Coulee Medical Center, where she refused treatment.

Wyena fell asleep at the wheel and the vehicle peeled back about 15 feet of the steel guardrail. It ended up in the ditch alongside SR 155 about 10 feet below the highway level.

Parts of the car were scattered all over the roadway and beside the road.

After maintaining traffic control, Grand Coulee Police turned the incident over to the Washington State Patrol.

The driver did not have a valid operator's license.