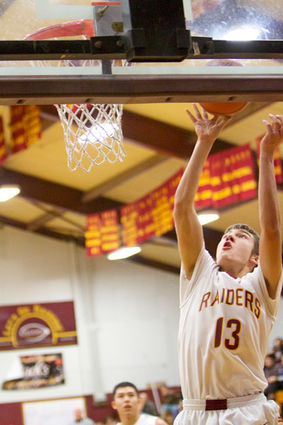 Austin Rosenbaum goes up for two against Entiat to contribute to his 11 points in the game. - Scott Hunter photo

The Raiders defeated Entiat at home on the 11th due in part to a high scoring fourth quarter. LR won by the score of 51-42 over the Tigers to improve the Raiders' win-loss record to 5-4 overall.

The Raiders started slow as the first field goal of the game came with four minutes left in the first quarter. Entiat took advantage of the Raider sluggishness to take the lead 10-9 at the end of the first quarter. In the second quarter Entiat played with a determination to avenge their earlier loss this season to the Raiders. LR suffered from rebounding issues and continued to play sluggish through the quarter. The score at half was Entiat 23, LR 21.

Fouls began to plague the Raiders in the third quarter, but the game remained close. LR found a spark when Jacob Palmer made some much needed baskets that propelled the Raiders into the lead. Their offense began to hit shots and outscored the Tigers in the fourth quarter 17-11 to hold on to the lead and win the game.

Chance Garvin led the Raiders in scoring with 20 points. Palmer led the second half rally and scored 14 points on the night. Austin Rosenbaum contributed 11 points against the Tigers.

Last night the Raiders' schedule had them taking to the floor against the Manson Trojans. The Trojans came into the game winless, losing by an average of 20 points.

On Friday the Raiders will travel to Kittitas for a 7:30 p.m. tipoff against the Coyotes at Kittitas High School. Kittitas is 7-3 overall, 2-0 in Central Washington 2B play and on a four-game win streak.

White Swan will travel to Gailord Nelson Gym on Saturday for a 6 p.m. game to make up the game that was postponed Jan. 7 due to the weather in the Yakima area. The Cougars are 5-6 overall and 2-0 in CWL 2B play. All but one of the Cougar wins have come against B schools, whereas all six losses have been to South Central 1A schools.