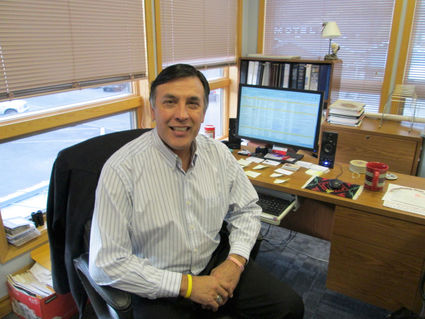 Joe Pakootas, CEO of the Colville Tribal Federal Corporation, has filed to run as a Democrat for Congress from the Fifth Congressional District. If successful in the primary, he will face veteran Congresswoman Cathy McMorris Rodgers. Tribal businesses he oversees employ more than 400 people. (Roger S. Lucas photo)

Joe Pakootas, chief executive officer for the Colville Tribal Federal Corporation, confirmed Tuesday that he has filed for Washington's Fifth Congressional seat as a Democrat.

While Pakootas, 56, stated he will make his formal announcement in a week or so, he told the Spokesman-Review in a business interview published last Sunday that he was going to run for Congress. He confirmed this Tuesday.

Pakootas stated that his run was about jobs, health care, economic inequality and education, all issues that affect many Americans.

Pakootas recognizes that his is a big task, trying to unseat Cathy McMorris Rodgers, who has held the seat in the House of Representatives since 2005. Rodgers chairs the House Republican Conference.

The CTFC was recently recognized as the University of Washington's "Minority Business of the Year."

The CTFC businesses include the Colville Tribes' three casinos, three grocery stores, two smoke shops and other interests, including Barney's Qwik Stop which opened a year ago in Kettle Falls.

The businesses employ over 400 people.

Pakootas pointed out that the Fifth Congressional District encompasses nine Eastern Washington counties and stretches from Canada in the north to Clarkston and part of Walla Walla in the south.

"A big area," Pakootas noted, "and a lot of people to meet."

He said a run for Congress has been in the back of his mind for some time. Friends have encouraged him to run, and the tipping point might have been when Democratic groups in some of the southern counties participating in a "search for a candidate," met him and encouraged him to put his hat in the ring.

"I think it will take from $1 million to $1.5 million to launch a successful race," Pakootas stated. He said Tuesday that he has started some fund raising and is meeting people.

How can a busy executive have time for a Congressional race? Pakootas stated he probably will take a leave of absence later this year so he can devote his time to the campaign.

Pakootas said he filed for the office the day after Thanksgiving, and as yet doesn't know if any other Democrats have decided to run.

While Pakootas' office is in Coulee Dam, he and his wife Cheryl live in Inchelium, within the Fifth Congressional District. The couple have four adult children and six grandchildren.